Photos from the "HVAC Takes a Shine to the iPad" article

Labels: ACHR News, HVAC, iPad 1 comments
The below pictures were taken for the "HVAC Takes a Shine to the iPad" story. The first one was published with the article, the other two weren't published, but were taken at the same time. Enjoy!

HVAC Takes a Shine to the iPad

ACHR the NEWS printed an article yesterday about the use of iPads in the HVAC industry. Comfort Supply was lucky enough to give the distributor case study. You can read the whole article here, or read the section about Comfort Supply below.


DISTRIBUTOR TRAINING
Comfort Supply HVAC (Nashville, Tenn.) is a Ruud distributor with five branches. Billy Jobe is district manager of sales and operations, and he’s passionate about his company’s drive to be at the forefront of new technology. Comfort Supply is determined to set a progressive example for its contractor customers, so the distributor has outfitted six sales representatives and one service technician with iPads. “Our salesmen have had them in the field for about a month now, and they really like them better than their laptops,” Jobe said.

Accessibility to information is key. “With the iPad they can pull up all of our consumer literature that tells about all of our equipment,” Jobe said.

“They are able to pull up a remote site from Ruud that gives all of the product specification information, including wiring diagrams, and how to match systems together to get certain SEER ratings.

In addition to accessing this general information, Comfort Supply’s team is also using the iPad to train contractors on Design Star, a new program designed by Ruud that estimates heat loads for houses.

“Design Star was made specifically for the iPad, so it’s easier to use on the iPad,” Jobe explained. “It gives a contractor a proposal that they can print off for a homeowner.”

Comfort Supply is also working to set up an ordering system so that its salespeople can order equipment through their iPads. “Our IT department is trying to get them all linked up so salesmen can do an order on the spot,” Jobe said. “It will cut down time. It will cut out one or two phone calls and needing a person to handle the calls.”
MOBILE SOLUTION

A mobile solution like the iPad is exactly what his sales team needs, Jobe explained, because they are on the road all the time. Jobe has been impressed with the iPad’s ability to connect to the Internet. “The iPad gives you a little more versatility with the wireless card,” he said. “It seems to react better with WiFi cards than laptops do. Plus, they allow so many more options. With iPads, you can get the apps for every type of HVAC equation.”

The durability and size of the iPad have also been beneficial. “We bought a hard rubber shock case for each one, and we haven’t had any issues as far as damage or breaking,” Jobe said. “And they’re smaller and easier to carry.”

The iPad is also aiding the team to become more organized. “They’re just learning that it’s a lot easier to keep track of everything,” Jobe said. “They’re not carrying files or a box full of quotes. We’ve cut down their time some so far, and I expect that to get better.”
IN THE FIELD
Rocky Cothron, a service technician at Comfort Supply, said that so far he is tickled with his iPad. It has made his job easier and is more rugged than his old laptop, he said, adding, “I had it out in the rain the other day.”

For Cothron, the iPad is more about accessing the web and keeping track of his notes than downloading the latest apps. “Mainly, it’s the access to the Internet and the manufacturer’s website that really helps me,” he said. “Most of the apps they have out there are for general contractors, and you can wind up with a hefty bill if you download a bunch of them. I use the Internet more than anything because it doesn’t cost you anything.”

For instance, Cothron explained, he saves pressure charts and wiring diagrams from the web to make them readily available on his iPad.

“It’s just like you picked up your desk and carried it with you, only it’s in a little bitty black pad,” Cothron said. The iPad has a notepad app included that “looks like a legal pad and logs in [notes] by the day.” Using this feature, Cothron said, he can type whatever notes he needs — and he doesn’t even have to carry a pen.

He said that when he first pulls out his iPad to take notes on a job, “It kind of scares the contractors sometimes. But it’s actually just helping me out in the field.”

Cothron also finds the iPad useful for presentations. “It’s really been helpful to me to use it for a presentation. You can show the customer’s website, and you can pull up the parts they need.” As a natural salesman, Cothron always wants to make the sale right then and there. When he can pull up the information he needs to complete the deal on his iPad, it’s that much easier for him.

Cothron added that he’s only had his iPad for about two months. “I’m still learning about it. There’s a lot that thing will do that I haven’t tapped into.”
PASSING ON THE iPAD

Jobe repeatedly stressed the importance of training contractors on use of the iPad. “If I can prove it works for me, they will follow,” he said. “If we can prove it’s making our job easier, they know that if it works for us, it will work for them.”

He admitted, “We use our sales guys as guinea pigs sometimes to show our contractors that we can do this, and so can they.” Initially, according to Jobe, many contractors look at a device like the iPad as a newfangled thing that’s “not going to work right.”

To counter this attitude, everyone at Comfort Supply tries to be forward-thinking and open to change, according to Jobe. He added that the company’s purchase of seven iPads is just the beginning. “Our use of iPads will be increased in the future. We do see it growing and coming to inside sales staff and branch managers.”

He continued, “We can’t wait until we get the iPad fully operational with everything we want to get on it. I feel through 2011 it will be a key tool for how we get our dealers training on all the programs we offer.”

I am currently at the AHR Expo in Las Vegas, and Ruud is making a product launch with some new prototypes of their AC and heating line. See the pictures below! 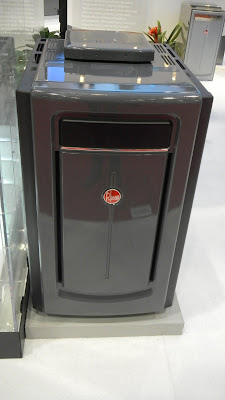 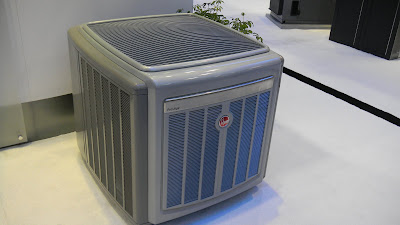 The trade show runs through tomorrow. For more information, check out the the expo's website.

Promote Your Page Too

Visit our You Tube channel to catch all of our videos